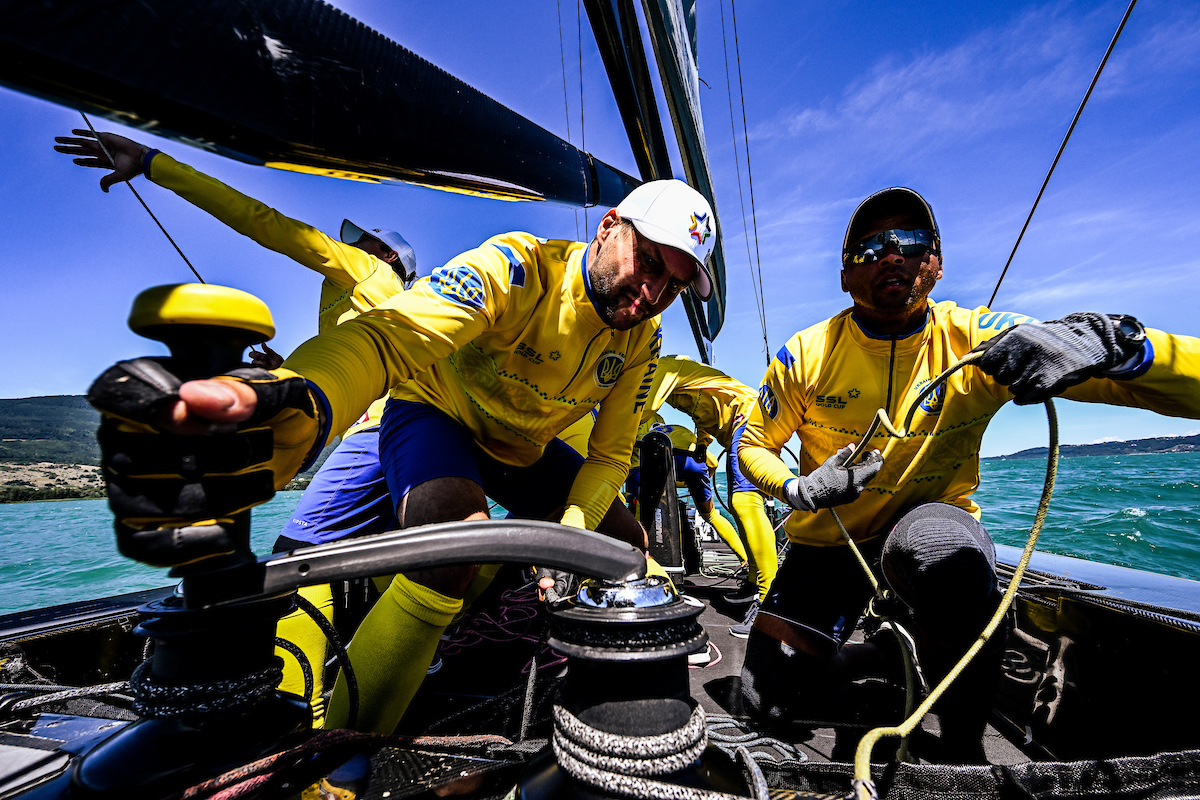 After another two races and two victories, SSL Team Ukraine are just one point away from qualification for the Finals in Bahrain. SSL Team Thailand look favourites to join them after two more 2nd place finishes.

SSL Team Ukraine held off a late charge from SSL Team Thailand to win Race 4 with just seconds to spare. Behind, SSL Team South Korea edged their battle with SSL Team Singapore to finish in 3rd.

'Haydamaky' of Ukraine led the fleet after another excellent start, but always lurking in their rearview mirror was SSL Team Thailand, never more than 20” behind. Closing fast as the finish line approached, perennial bridesmaids SSL Team Thailand did everything they could to grab an elusive first win, but the Ukrainians held on.

For SSL Team South Korea, the lowest ranked team in the group (56th), a third place kept their qualification hopes afloat, but both they and SSL Team Singapore knew they needed a big performance in Race 5.

SSL Team Ukraine embrace as they cross the line, sealing victory in Race 5 to all but qualify for the Finals in Bahrain later this year. For SSL Team Thailand, it’s no surprise with yet another 2nd place, while 3rd place from  Singaporean 'Guardians of the Bay' is enough to end any chance of qualifying for SSL Team South Korea.

It was a dominant end to a dominant day for SSL Team Ukraine, clearly revelling in conditions that were like chalk and cheese compared to the light winds of earlier in the week. Unlike the previous race, this time Chang Thai were unable to trouble Ihor Matviienko’s crew.

The real race was unfolding behind, with SSL Team South Korea and SSL Team Singapore scrapping it out to keep themselves in overall contention. Jeemin Ha’s Red Fury seemed to have contained the Singaporean threat until disaster struck at the halfway turn.

A problem dropping the spinnaker for SSL Team South Korea ended with a tear in the sail and saw the Singaporeans, captained by Jovina Choo, edge in front. If this was costly, a second mistake at the top mark proved catastrophic, and there was no way back for the Koreans.

Double or nothing on Golden Day

One final race for two Finals places. SSL Team Ukraine and SSL Team Thailand have the advantage, but with double points available on Sunday, SSL Team Singapore still have a chance to leave Switzerland with a golden ticket to Bahrain.

"We are happy about our 2 races. The wind was good, not too many shifts or gusts. We just tried to control the fleet. To win the race in the lead is always easier than chasing the leader. We lead the group but we must be careful tomorrow because points count for double and we want win it."