The SSL is a circuit created by sailors for sailors. It is born from a desire to offer sailing champions a simple, well priced and efficient platform from which to showcase their exploits to a global audience. Celebrating the stars of yesterday and today while creating those of tomorrow is the vocation behind the Star Sailors League, a circuit that seeks to be part of sailing tradition while making it more ‘pop’ and more attractive to the public.

The SSL is modeled on the principals of tennis' ATP with an annual calendar made up of four Grand Slams and the Finals based on the Masters. At the end of the circuit the champion of champions will be crowned.

In a mechanical sport where the race for technology sometimes gets in the way of the race for glory, the SSL aims for equal competition where the talent of the sailors is at the forefront and the champions become heroes that inspire new generations of sailors.

The Star Sailors League (SSL), an international regatta circuit, was launched in 2013 by a group of professional and amateur sailors to support sailing athletes. The movement brings together all regattas raced in the Star Class and offers a ranking based on the ATP World

Tour model created by tennis players in 1972. From 2020, the SSL circuit will be made up to 220 regattas and five major events each year: four Open Grand Slams and one Finals. Inspired by the tennis Masters, the annual Finals will be the flagship competition that will showcase the SSL Circuit. From a sporting point of view, the Finals represent the major challenge of the year bringing together the top ten ranked teams on the SSL leaderboard and Champions from other classes. Financially, the closing event of the season stands out for the prize money: the Finals has the biggest purse of the Circuit.

The concept of Grand Slams goes beyond the athletic challenge. They provide a showcase for the sport, generate myths and icons, inspire the youth and engage audiences. In tennis, there a four Grand Slams throughout the year. They are the most coveted and are placed above all

other competitions in terms of earning, points and above all reputation. Winning one of these four tournaments is a major globally recognized exploit. There are four in tennis, four in golf, four in rugby and hopefully, thanks to the SSL introducing this concept to its Circuit, one day there will be four in sailing. The Grand Slams will bring together the best sailing athletes. They last five days and they will be worth many points and a rather big price money. They can help good sailors from any class to qualify for the SSL finals without having to race the whole Circuit.

To offer maximum opportunities to all sailors, the SSL will schedule four types of SSL Grand Slams ranked based on the sailing conditions they offer:

The Grand Slams have the following characteristics:

Like other major sports such as hockey or basketball, the SSL Circuit ends each season with a Grand Finale (hereafter called the SSL Finals). Placed above all other competition on the Circuit due to the level of participation, the SSL Finals are the best endowed in terms of prize money and are heavily weighted on points - the equivalent of a Masters in tennis. Competing in this event against the best athletes in sailing is a major achievement.

The SSL Finals  are  reserved  for the highest  SSL Ranked Sailors  as  well as  exceptional sailors invited by the SSL  based on  their  sailing pedigree. In general, the fleet of between 16 and 30 boats will be distributed as follows:

The SSL Finals include the following features:

Based on the ATP Ranking, the SSL Ranking aims to reward athletes using a points system. The concept ranks athletes based on results obtained throughout the year at Star Class regattas and SSL events. This ranking serves to select skippers for the SSL Finals.

The SSL Ranking offers sailors the possibility to qualify by racing the four high from competition in their favorite class.

The purpose of the SSL Ranking is to :

Summary of some of the current rules :

What they say about the SSL

The medals that will be awarded to the Top 3 teams of the 2014 & 2015 SSL Finals were crafted by Huguenin, a famous Swiss manufacturer. This prestigious company, created in 1868, is located in Le Locle next to many prestigious Swiss watch brands.

In collaboration with our designer Marc Rouiller, the SSL medals, which have a diameter of 9 cm, were manufactured by craftmen and engravers who, traditionally, design medals for significant events. Amongst their clients are national and international associations and federations.

These include, for example, the International Ski Federation (FIS), the Union of European Football Associations (UEFA) and the International Federation of Association Football (FIFA). In 1948, Huguenin had the honour of producing the medals for the Winter Olympics in St. Moritz as the responsibility to design and produce Olympics medals is always given to a local manufacture.

In 1959, Sir Roland Symonette, first Premier of the Bahama Islands, had donated a cup for the Star regattas in Nassau but, for a long time, it has never been awarded.

In 2013, the Brazilian sailors Robert Scheidt and Bruno Prada were the first ever to have their names engraved on the silver cup. In 2015, George Szabo won the First SSL Lake Grand Slam and the SSL Finals with Edoardo Natucci. Last year Mark Mendelblatt and Brian Fatih were honored to engrave their names for the second time.

All these names are engraved on the Dennis Conner Trophy:

After Andrew Simpson’s tragic death in 2013, the idea of creating a trophy honoring his memory quickly became self-evident. Andrew Simpson’s friend and Swedish sailor, Anders Ekström imagined and designed it by thinking of the kind of person that Andrew was.

The Andrew Bart Simpson Memorial Trophy is given to the crew who is leading the Star Sailors League Crews Ranking. Every time a crew gains leadership of the ranking, he is honoured with the Andrew Bart Simpson Memorial Trophy. This honour may well be passed from hand to hand, during the course of the season. At the end of each year, all of the sailors who have led the ranking will have their name engraved on the cup, as well as the number of weeks in top position of the Star Sailors League Crews Ranking. 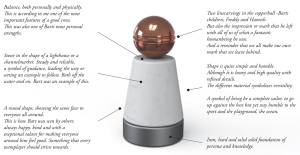 Two names were engraved on the trophy last year: Andrew Simpson (GBR) and Bruno Prada (BRA). This year, before the Star Sailors League Finals only one sailor had the honour of holding this trophy: Bruno Prada is SSL crew number 1 for more than 100 weeks

All these names are engraved on the Andrew Bart Simpson Memorial Trophy: