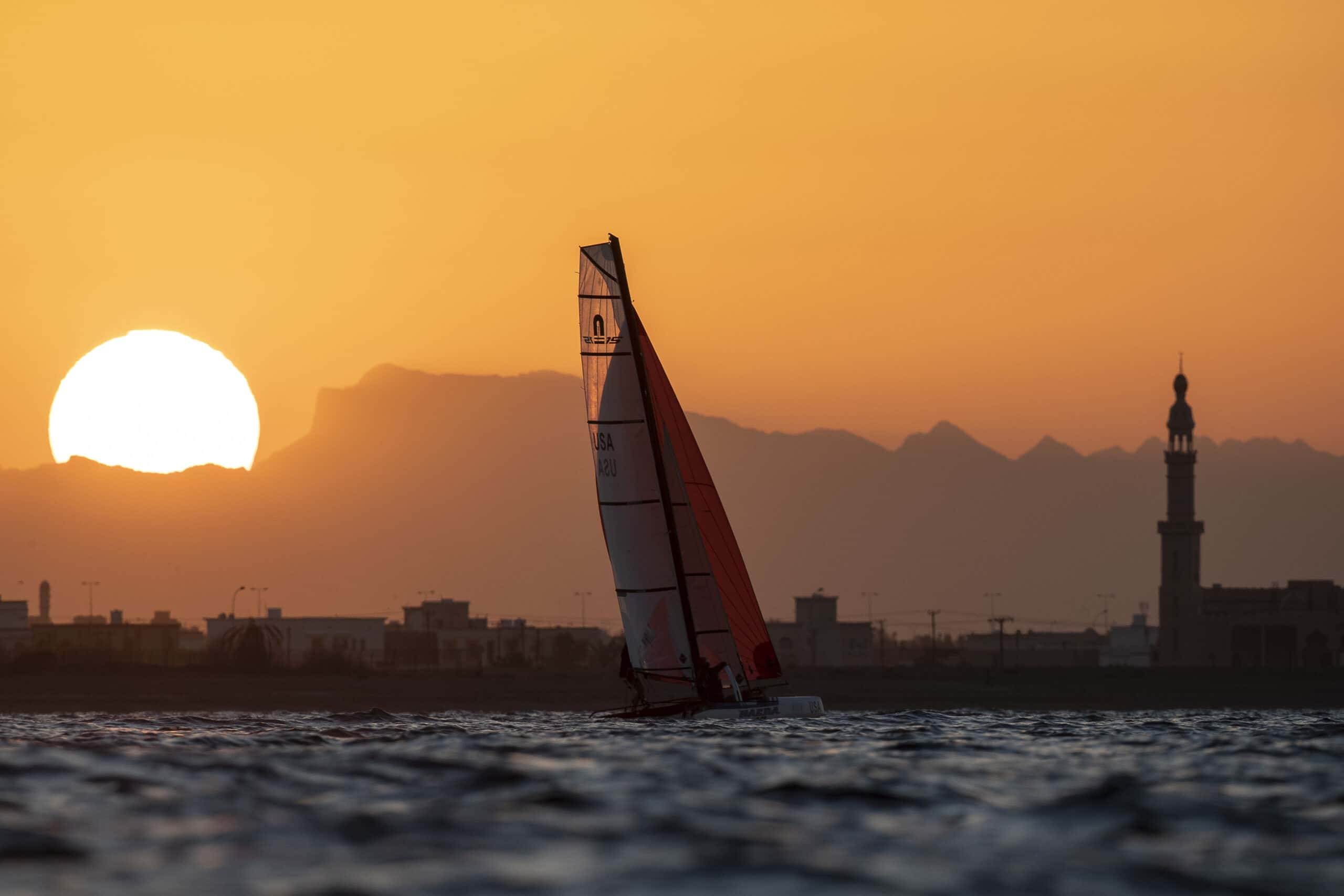 Sailing Youth World Championships were hosted in Oman for the first time. The waters of Mussanah brought up to the light new young talents and probably next Olympic heroes. We chose five sailors and crews of 433 who made the Omani sun shine just a little more this Winter. 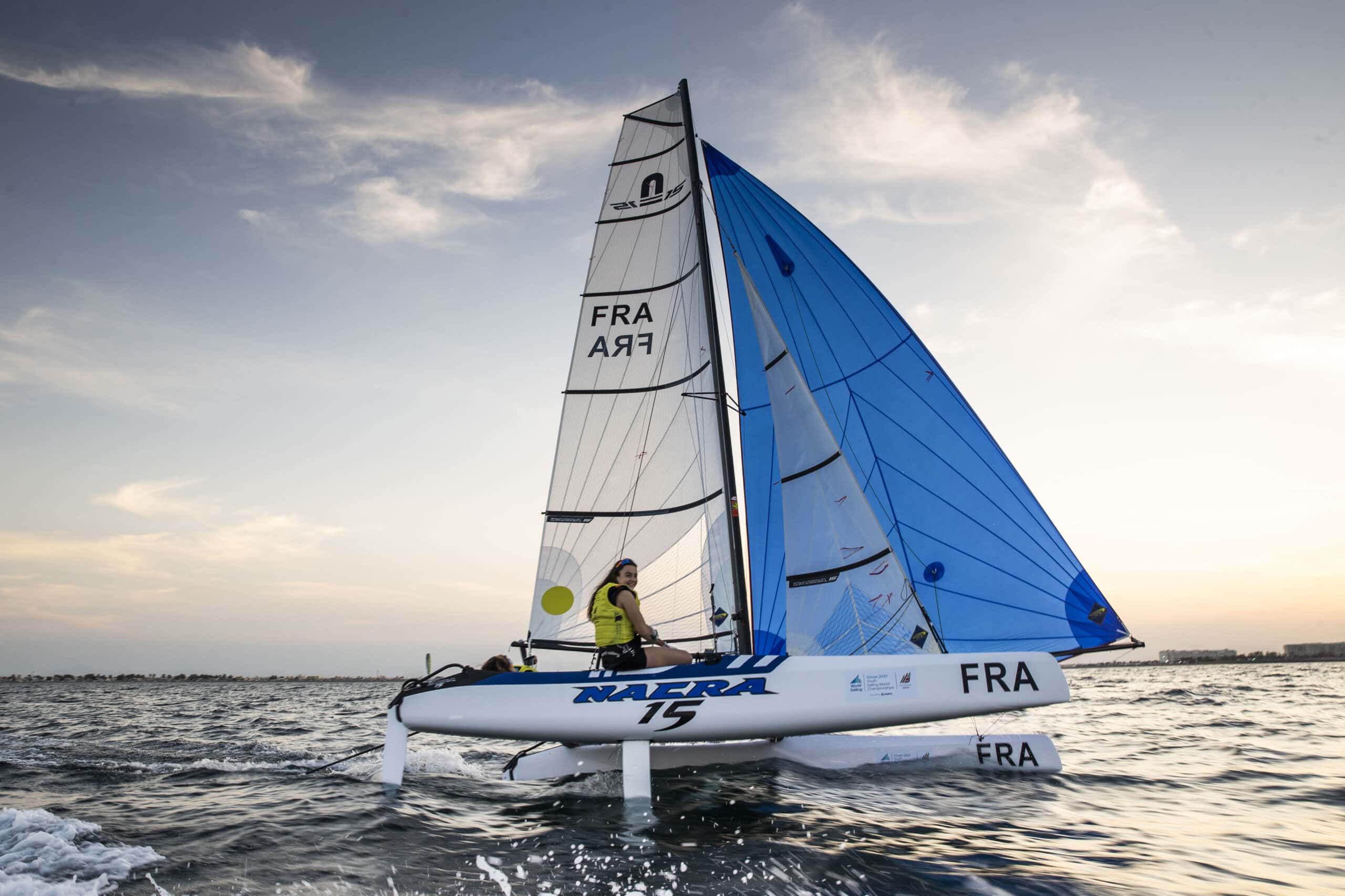 At just 15-year-old, France's Thomas Proust (France RK n°4) raced (and won) his first U19 Sailing Youth World Championships. During the first training race with Eloise Clabon (France Crew RK n°10), they led the Nacra15 11-strong fleet by far. "At that moment, we knew we could do something greater than we would expect," tells Thomas. "It was a mental warfare in the last race as we shared the same number of points with Kay Brunsvold and Cooper Delbridge (USA). We kept cool as the race started on the wrong foot for both of us. But we saw the USA boat did some wrong choices. We kept sailing confident and finished 2nd on the leg. And we snapped the title right at the end," remembers Thomas.

The French youngster from La Rochelle, where he is also a Moth Foil star there is now looking at Olympic Nacra17 with Paris 2024 or Los Angeles 2028 as their target. "Olympic Games are a dream for us. Competition is fierce within France's Nacra17 team, but we will do our best to get better, and maybe, one day, that dream will come true." 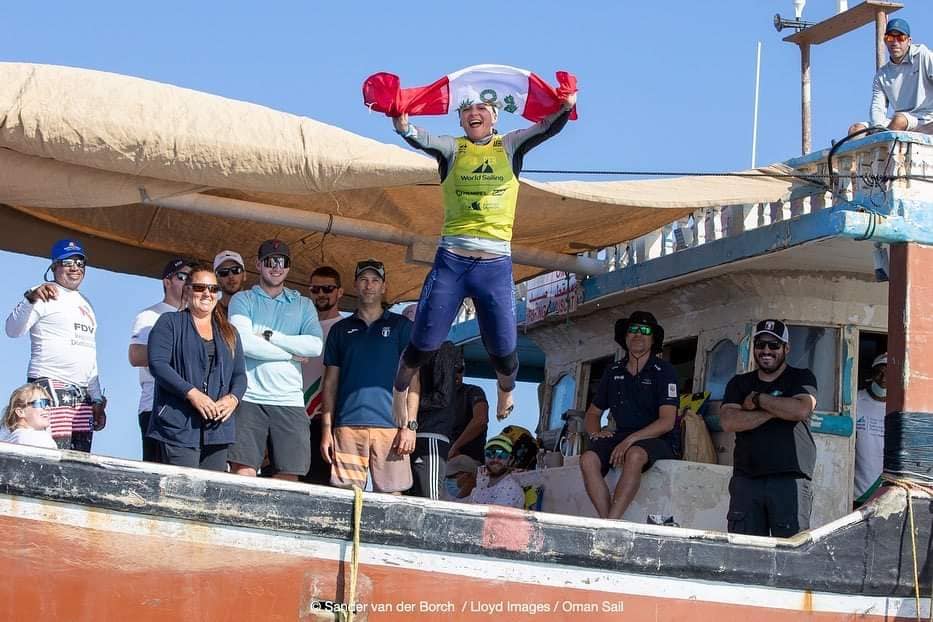 Her voice still thrills with emotion despite a 72 hours trip from Oman to her native Peru. Why should not she? By winning Laser Radial ILCA 6 title, Florencia Chiarella became the first-ever Peruvian Sailing World Champion. "Of course, I feel proud. All the physical, mental, and technical work is paying off," she admits. It all started in Cali in Columbia during Pan American Games just before flying to Oman. "I felt I had a good speed, and I knew I could make a result."

Despite finishing 5th overall in South America, she came to Oman confident. "As soon as I started sailing, I had the exact same feeling of speed and focus." This World title gave her enough motivation to achieve her ultimate goal: participate in the next Olympic Games in Paris 2024. She knows the competition will be fierce against Paloma Schmidt Gutiérrez (Peru RK n°5), who has represented Peru in Laser Radial since Beijing 2008. "Before going professional in 2023, I wish I could join SSL Team Peru for SSL Gold Cup." The next day, SSL team Peru's captain Stefano Peschiera (Peru RK n°1) has rightfully called up Florencia to join them on Qualifying Series taking place in May and June on Neuchatel Lake. Wishes can come true in Christmas time! 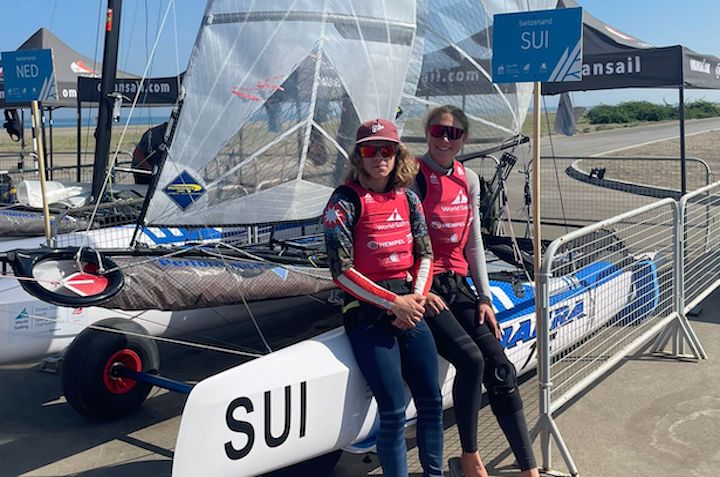 Winners of Nacra15 World Championship in La Grande Motte (France) last October, Axel Grandjean and Noemie Fehlmann (Switzerland Crew RK n°4) came to Oman with the clear ambition to put Switzerland again at the top. "The level was, really really high here in Oman," confesses Axel. "We were very prepared, and this 3rd place validates our effort and our work with Loic Forestier, our coach." After their performance in Oman, Axel is now leading the Swiss SSL Ranking, and he is now more than ever in a position to get a spot on the Swiss boat. 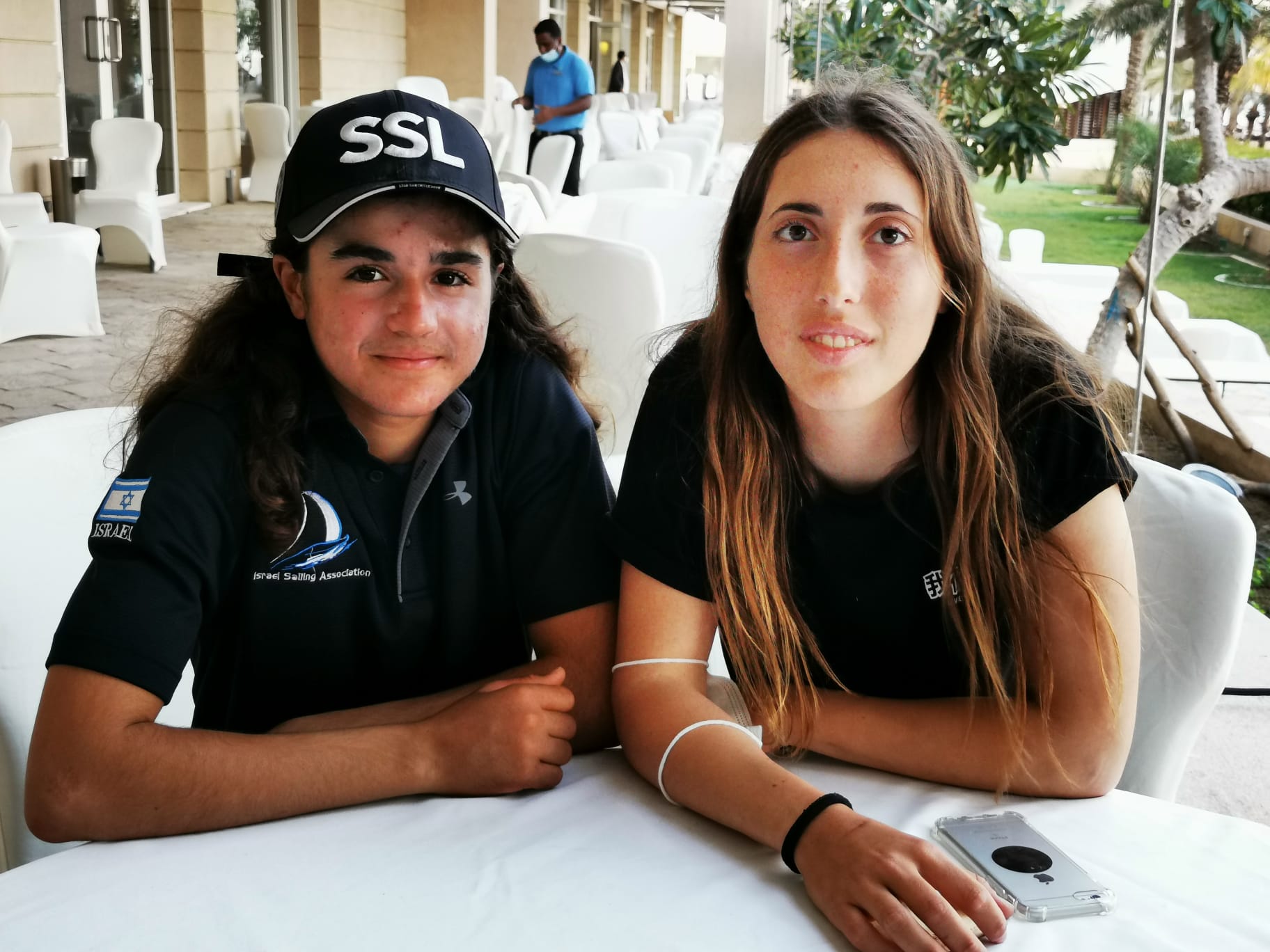 Roy Levy, a King in progress

With 3 victories out of 9 races, Israel's 420 Roy Levy (Israel RK n°4) and Ariel Gral (Israel Crew RK n°12) marked one of the top performances in Oman. Although the double-handed team finished 3rd of the Youth World, they enjoyed every bit of the event. "This competition is definitely part of my Top 3 event so far. People were very kind and generous with us," explains Roy before coming back on his results. "We had two bad results (12th and 14th) that put us down in final ranking. What is more important for us is that we stick to the plan even if the strategy was not the right one."

Next year, 470 World Championships will be held in Sdot Yam Sailing Club in Israel, Roy's club. The 15-year-old wants to take this opportunity to jump into the upper category. "We still need to discuss that with my coach, but it would be very exciting!"  Meanwhile, Roy Levy is now Israel RK n°3. "For me to be 3rd of the Israel skipper ranking is a real motivation to do better and continue racing to reach the top." 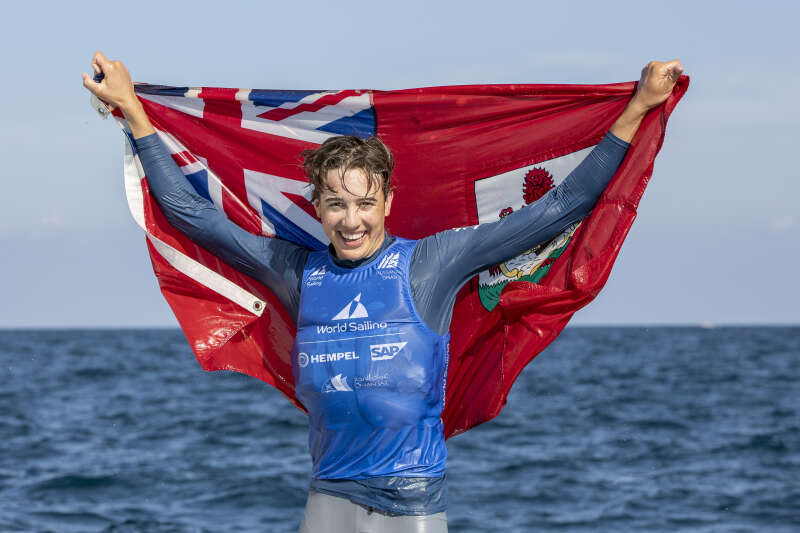 Sebastian Kempe (Bermuda RK n°1) sailed his way into Sailing history books. The Bermudian sailor secured the island’s first-ever title at the event in the men’s Laser Radial class. But for Sebastian, this is definitely not the end of the road. "I had to answer that a lot that since I have won," tells the newly-crowned. "So it is certainly nice, but my goal is to be the best sailor ever, not just Bermuda's. " This statement tells a lot on the potential and the will to succeed of the 16-year-old sailor who wishes to go on Laser Standard by the end of 2022.

"I came to Oman with the goal to win it. Since I started Laser Radial in 2019, my best result was 3rd place. From my victory in Race 1 on Day 2, I knew I could achieve my game planned," tells Sebastian. Now based in the U.K, he plans to go back to Europe after spending some holidays with his family in Bermuda. And he has one less concern: "With this title, my teachers now know that all the efforts I am putting in Sailing are worth it."

Anne-Marie Rindom: "The busiest year of my 12-year career"