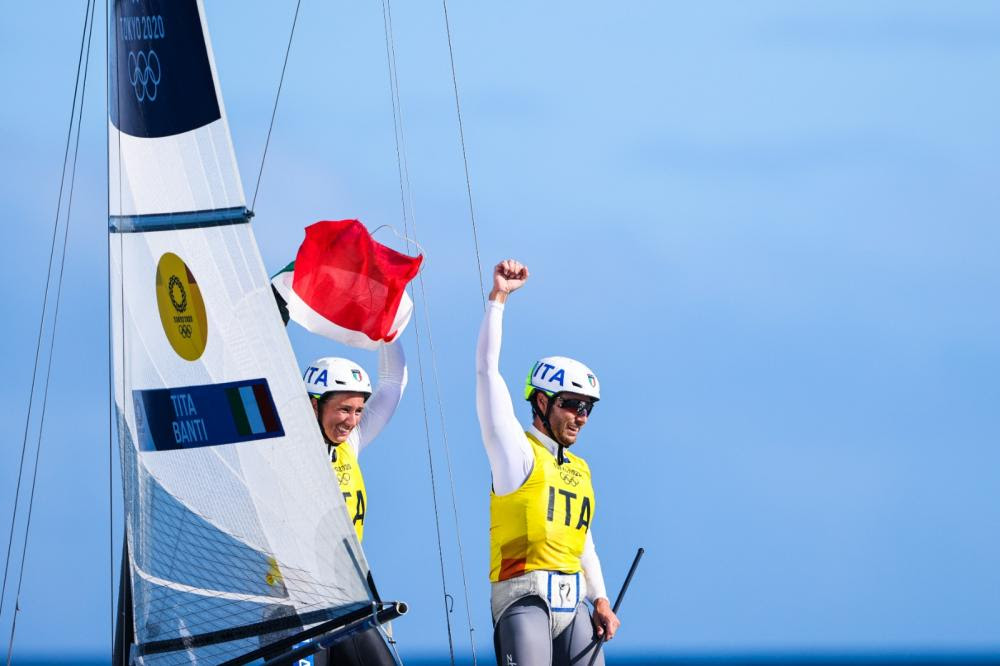 Poor positioning on the start line saw Italy and Great Britain starting in bad air, forcing both to tack early on to port. Meanwhile Germany was given a penalty turn by the on-water umpires for failing to keep clear of Australia who lined up to leeward of them. The battle for bronze had begun. First blood to the Boxing Kangaroo.

Great Britain got ahead of Italy further up the leg and were covering them on the approach to the first turning mark, all the while knowing that they’d to get a good few boats between them to overturn the Italian points advantage.

Leading around the top mark were the outgoing Olympic Champions from Argentina, Santiago Lange and Cecilia Carranza Saroli (ARG) who were not in contention for the medals this time.

Around in sixth place were the Rio silver medallists Jason Waterhouse and Lisa Darmanin (AUS) and, with the Germans fighting to recover from the effects of that penalty back in 10th place, the Aussies were up into bronze medal position.

On the downwind Italy passed Great Britain and moved ahead, making the gold medal even more secure for Tita and Banti. Germany was still a long way back in the last place, desperately needing to move up or the Australians to drop down the standings for that bronze medal.

Towards the top of the final windward leg, Germany overtook Brazil, a critical move that put them back into bronze if things could just stay that way.

Winning the Medal Race, even if not retaining their Olympic title, were Lange and Saroli (ARG), a great way for this popular team to round off their campaign. Great Britain crossed in fifth, a place in front of the Italians who started celebrating the gold. Silver for GBR, bronze for Germany, with Denmark just edging out Australia for fourth place overall.